INTERVIEW: Penciller Christopher Jones talks exclusively to the Drawing Board!

[Yes, another Christopher Jones interview. Chris a great guy who indulged me not in just interviewing him for his comics as a whole, but allowed me to pick his brain in regards to how to draw comics]

[Interview for the Toon Zone Drawing Board Website: 1st February 2004]

Christopher Jones, penciller on DC's 'Justice League Adventures' comic book, has taken time to talk to The Drawing Board about some of his work for the title from an artists perspective.

Christopher has kindly provided the scans of his pencil work and fellow Justice League Adventures inker Dan Davis provided the scan of the final inked piece. The Drawing Board thanks both for these contributions. 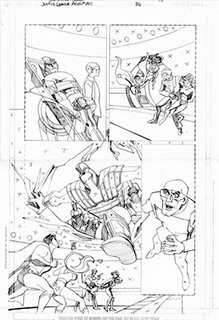 Christopher, with critical evaluation, what do you like and dislike about your artwork on this page?

Christopher Jones: I think this page worked pretty well. I especially like the large panel with the Ranndroids coming in through the roof. It was kind of like getting to draw the Sentinels!

In the finished comic, I thought the effect they did on the invisible Martian Manhunter in panel one was rather interesting. I had pencilled it assuming it would just get normal linework and coloring, so I was trying to just use the linework to make him appear transparent.

What do I dislike? Oh, if I was going to nitpick I'd probably want to change Sardath's body posture in panel 1. I didn't want him in an "action" pose, since he's supposed to be standing there, helpless. I think he looks kind of bored, now. I think Wonder Woman's hair looks a little glob-like in panel three. I always struggle with her hair. The animated design gives her this very peculiar hair shape, but on the show it's flat black. For the comic, you have to put highlights on it, and for some reason I really have a rough time getting her hair to work.

Are you very critical about your work in general? Do you think it's important that an illustrator is overly critical?

Christopher: It's important to care about the quality of your work, and you want to do the best job that you can. But the reality of comics is that it's commercial art being produced on a tight schedule. You have to know when to let it go and move on. It's finding the right balance between perfectionism and quickness that allow you to produce quality work on a deadline.

How do you feel about the progress of your artwork as an artist? What areas in your art would like to improve?

Christopher: I'm not sure if I see any one "problem area". I'm always trying to improve everything - from figure drawing to storytelling. Doing an "Adventures" book is kind of an odd thing, Because you aren't using certain drawing skills as much in favor of trying to capture the look of that animated style. That's why I like to keep finding side-projects that allow me to work outside of the adventures style, so those other drawing skills don't get rusty. 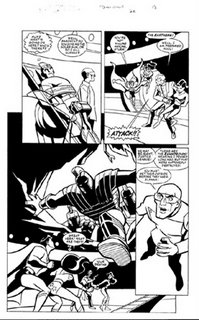 When you are drawing smaller characters - as in the giant panel - what elements of characters is it vital to retain to make them identifiable and their posture clear?

Christopher: That's one of the great things about the "animated" style that I think is applicable to all comic art: Having character designs that are bold and individualized enough that they still read clearly even when reduced to a very small scale. Whenever possible I try to give my characters individualized body shapes, clothing shapes, and postures, so they would be recognizable even in silhouette.

I think trying to convey mood and attitude through body posture is one of the most entertaining challenges in illustration. Thankfully that is universally applicable, no matter what style I'm being asked to draw in.

Christopher, thank you very much.

Christopher talks more about his work for issues 26 and 27 in a recent interview for Toon Zone News: http://forums.toonzone.net/showthread.php?p=1091912#post1091912

Just Who Is Me?